“Why are you in Sendai?” a slightly confused-looking businessman asked me and Oana as we stood huddled an umbrella waiting to get a table in a little izakaya. Most people think of Tokyo and Kyoto when they’re planning their Japan holiday, so what on earth were two English girls who spoke only passable Japanese at best doing in Sendai… in the pouring rain? Well, this particular overnight stay was admittedly largely influenced by my ongoing historical interest/obsession with a certain Sengoku-era samurai, Date Masamune.

Date Masamune was a powerful daimyo (in short, a samurai warlord) in the northern Tohoku area of Japan. I’ll save a longer blog post on his actual history for a later, but he is still extremely popular in Japanese fiction and entertainment today, largely in part because of his iconic crescent moon helmet and the fact that he had only one eye. Most anime and video game series portray Date Masamune with an eye patch but you won’t find any trace of it in art of the time. Pop culture Date Masamune may be young and handsome, but actual historical Date Masamune lacked the eye patch and got a bit fat in his old age. He still had that awesome helmet though.

If you’re a huge samurai fan and want to follow in the (kind of) footsteps of a famous samurai warlord, here’s a “Date Masamune holiday special” blog. Sendai, the capital of the Miyagi prefecture, is just an hour and a half’s Shinkansen ride from Tokyo, so it can be visited in a day. If you want to explore more of the city and visit the beautiful Matsushima Bay nearby (which we didn’t have time to do), I’d recommend two or three nights there.

The ultimate way to get around Sendai is via the delightful Loople bus. It looks like it’s come straight out of the 1930s but it takes you around all the main tourist sites. You can plan your trip in advance by downloading a Loople map here but you’ll also get a map when you buy your day ticket (620 yen). The guides and bus announcements are in both Japanese and English, and Oana and I were both surprised by how tourist-ready the city was, especially as we seemed to be the only non-Japanese people on the entire bus all day. More on Sendai’s amazing official guide book later on… 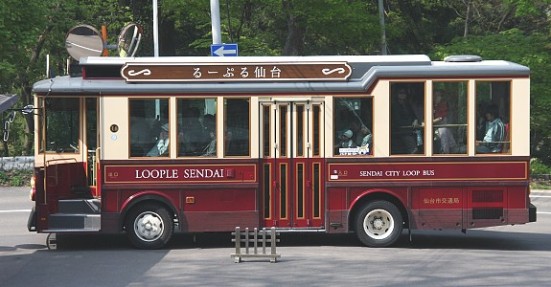 Your first Date-themed destination is stop 4 on the Loople bus – Zuihoden Mausoleum. This is the site where Date Masamune, the first of the Date lords to rule over Sendai, and his son and grandson, are entombed in elaborate mausoleums. Other descendants lie in less elaborate graves and, rather eerily, memorials of the samurai who followed Date Masamune to his death by committing ritual suicide also stand by his mausoleum.

I forgot to take a photo of Zuihoden Mausoleum on it’s own, so here’s one with me in it! (oops) 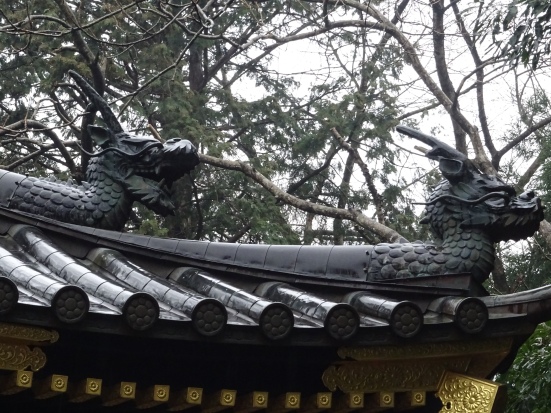 Date Masamune’s was known as ‘the one-eyed dragon’, and there were dragons all over the place! 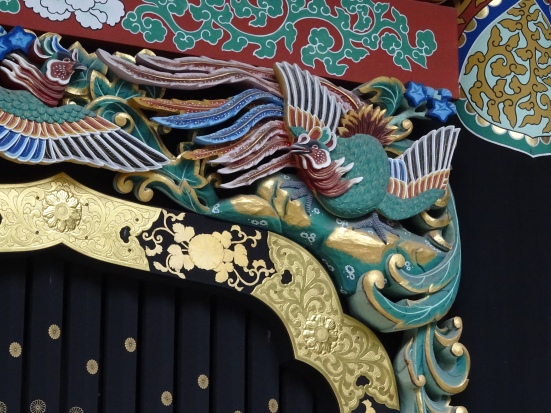 Zuihoden is decorated in the ornate style of the Momoyama Period 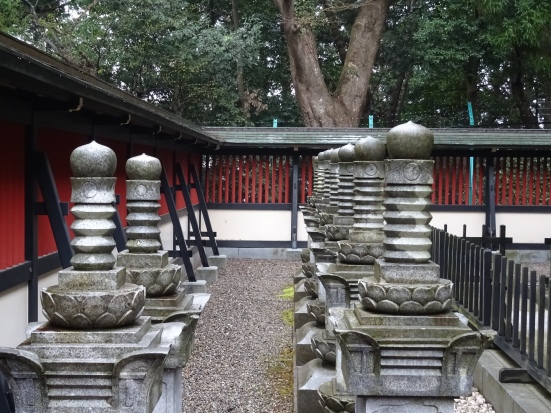 It was a steep climb, so there were bamboo walking sticks at the ready

When you’re finished exploring the serenely quiet forest area surrounding Zuihoden, head back down to the Loople bus and go to stop number six for Aoba Castle. This heavily fortified castle was built in 1600 on Mount Aoba, 100 meters above the town below. Sadly, the castle is no longer standing as it was destroyed by a giant fire in 1882 and bombing during World War Two, so all that remains are remnants of the stone walls and a great big statue of Date Masamune himself. Cue me jumping up and down and taking bucket-loads of photos. The grounds are also home to a museum about the former castle and history of Date Masamune (there are guide books in English, fortunately), which also houses a fantastic gift shop. I recommend doing lots of shopping here – both Sendai/Tohoku themed and samurai themed.

What’s that coming over the hill?

The statue in all its rainy glory

Seriously, it was raining heavily

Remnants of the stone walls

The Gokuku Shrine is also on the original castle grounds 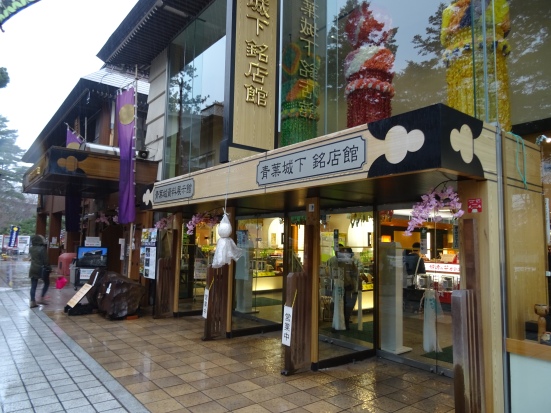 We couldn’t take photos inside the museum, so here it is from the outside 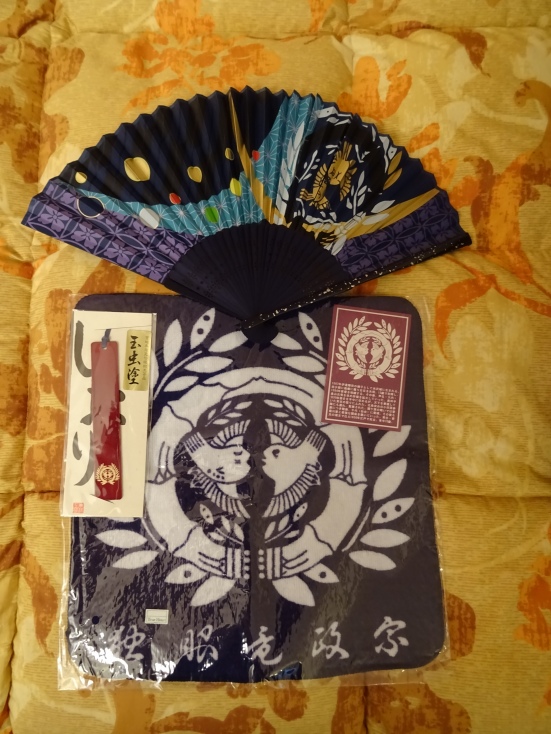 Spoils from the gift shop

Due to the rain and our general tiredness, we actually missed two other important Date-special sites. These are the Sendai City Museum, which houses Date Masamune’s iconic armour, (stop 5 on the Loople bus) and Hachimangu Shrine, which he commissioned and is dedicated to the Shinto god of war (stop 11 on the Loople bus). Oana and I sadly had to wrap up our samurai tour slightly earlier and took shelter in the downtown shopping area with a delicious matcha latte and strawberry cake. We took the opportunity to read the official Sendai guide book, which is quite possibly the best guide book we found in Japan. It’s very informative and includes random travel tips from Date Masamune himself. Sendai was the closest city hit by the tragic Tohoku earthquake in 2011, and there’s obviously a big drive to encourage visitors back to the region. We thoroughly enjoyed our short stay in Sendai and, if I get the opportunity to go back to the area, will definitely stay longer. 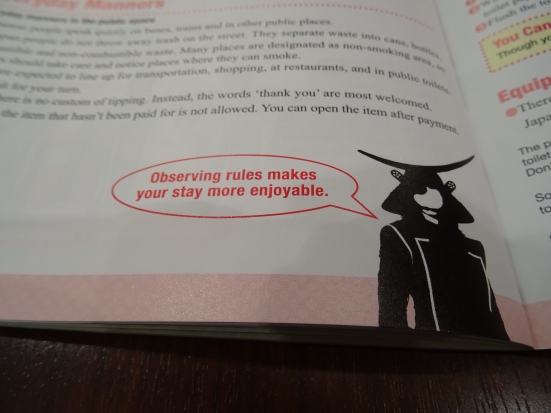 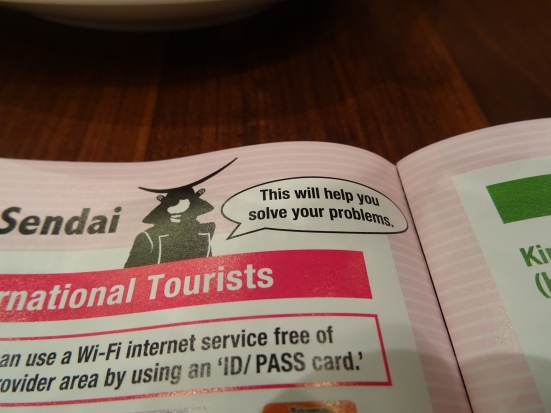 We did lots of ‘communicating by pointing’ in Japan

12 thoughts on “One day in Sendai: The Date Masamune trail”