It’s nearly Christmas, so here’s a blog post all about the deer (not reindeer – although watch out for those antlers) in Nara! This is another overdue holiday blog post, as we were in Nara in April just as the sakura were starting to fall like snow.

In 710, Japan’s first capital was established at Heijo (now Nara) but was moved to Nagaoka in just 784. Despite being Japan’s capital for a fairly short time, Nara is home to some of the country’s greatest historic treasures and oldest and largest temples. It is also home to hundreds of freely roaming deer, which in Shintoism are considered to be messengers of the guards. They’re cute and you can feed them, but if they’re really hungry they’ll suddenly seem more like seagulls.

For optimal deer-spotting, head straight to the great expanse of Nara park and pick up a packet of special deer biscuits from one of the many stands. I learned the hard way not to carry biscuits around in your pockets. They have learned to bow their heads to persuade you to keep giving them food, so they know how to tug on your heart strings before ‘attacking’. Oana was almost booted into a river by one particularly hungry deer and two poor girls had their unguarded picnic basket ransacked by another. Even the greatest of animal lovers will find these deer a bit ominous by the end of the day.

They start off cute…

Until they descend on you

‘I don’t have any more biscuits!’

Bowing is an effective move on gullible tourists though 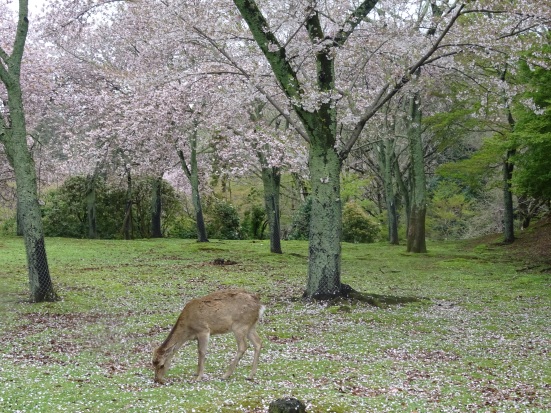 Deer have a combination of deadly Street Fighter-esque moves

Nara is home to a lot of beautiful historic shrines and temples, as well as hungry deer. Todaiji was built in 752 as Japan’s head Buddhist temple, and its influence grew so powerful that the capital was moved away from Nara to limit its influence over government. Todaiji’s main hall, the Daibutsuden, is the world’s largest wooden building – even though it is now just two thirds its original size – and houses one of Japan’s largest bronze Buddha statues (15 meters tall). The temple is constantly undergoing work due to its size, and it’s possible to donate a roof slate and write your own message on it, which Oana and I had to do. Also, do those gold ‘horns’ on the top of the temple remind you of anything?

Kofukuji was once home to the Fujiwara family, a powerful clan during the Nara and Heian periods. It still remains an important cultural site today, and its 50-meter tall five storey pagoda is Japan’s second tallest. The National Treasure Museum, which was undergoing renovation when we visited, and Eastern Golden Hall are well worth a visit for culture vultures.

There are many other sites to visit in Nara, and part of the beauty is that it’s so easy to just stumble across something. I also recommend checking out the Government Prefecture Building, which has an interesting little exhibition of earthquake infrastructure and an ‘earthquake-simulating’ chair. I’ll leave you with some more photos from Nara. It’s just an hour’s JR train from both Osaka and Kyoto, so is perfect for a day trip! Visit japan-guide.com for directions and more travel tips.

3 thoughts on “Deer-dodging in Nara”