Today’s guest blog comes from Jessy at The Green Turnip! Jessy is studying to become a Japanese vegetable sommelier and blogging about the experience. She thinks exploration is the ultimate destination. She is a student of Japanese, a lover of mushrooms, and a fan of the handwritten letter. When not online, Jessy follows her curiosity into all things bright and beautiful (and delicious).

Prepping veggies without a knife is quick, simple, and gives a rough edge to your veggies to maximize absorption of delicious flavors. These three simple techniques are easy to use in lots of recipes!

Before I share these wonderful Japanese techniques to prep veggies without a knife, I think I should acknowledge the artistry of Japanese knives. Perhaps I do not need to tell you that Japan is pretty famous for their knives.

How well known? When asked about their favorite knife, six top American chefs all named Japanese knives as their top pick. Glance over Japan travel forums, and you will find discussion threads of visitors debating the best knife shops to visit in Japan. The country produces not only beautiful metal blades- a Kyoto ceramics company makes incredibly lightweight and sharp blades from a proprietary material that promise to keep its edge for years!

The art of producing knives in Japan is perhaps topped only by the amazing variety of techniques for using knives in Japan. My textbook for the Japanese vegetable sommelier exam requires memorizing nearly 20 (!) different cutting techniques. Forget mere “dicing” and “slicing.”

If you have ever had the pleasure of sitting at the counter of a sushi restaurant and watching the delicate preparation of paper thin slices of fish, you know what I mean about the art of Japanese knife techniques. I still remember the first time I saw an expert sushi chef cutting a Japanese daikon radish using the “katsuramuki” technique, which creates those whispy strands of daikon particular to sushi restaurants. The technique involves slicing the radish in a continuous spiraling motion, to create an unbroken, nearly transparent sheet of radish. Craziness!

Given the fame of Japanese knives and the highly specialized cutting techniques in Japanese cuisine, I was surprised when I started cooking Japanese food and encountered new ways of preparing vegetables that did not require a knife. Most of these techniques rely on crushing or breaking the vegetables with your hand. Since there is no clean cut, the edge of the vegetable is quite rough. My vague memory of high school chemistry tells me that this rough surface should help the vegetable be more absorbent, meaning that it soaks up extra yummy flavor.

Now full disclosure, I am not sure if these techniques are uniquely “Japanese.” I first learned these techniques in my Japanese cookbook, but I am sure that other cuisines use similar techniques. With that caveat, let’s proceed with the list!

Here are 3 fantastic techniques for prepping vegetables that do not require a knife:

If you are planning to stir-fry mushrooms, use them in a marinated salad, or make stew, tearing the mushrooms provides a pleasantly homey and rough appearance. It looks especially nice if the mushroom has a relatively large cap (think mushrooms like shiitake). However, pretty much any mushroom can be torn by hand to produce pleasing mushroom chunks that work beautifully in many dishes.

The technique is simple – tear the mushrooms into bite-sized chunks along the fiber.

The fiber of the mushroom usually runs from end to end of the mushroom. Make the pieces as big or small as you like. For even and consistent cooking, it is best to keep the pieces about the same size. You can also tear clumped mushrooms in a similar way to yield small bunches of mushrooms (think: shimeji, enoki, or maitake).

Tearing is great to try with any mushroom! I like to tear white button mushrooms in half before frying in butter. Another plus of this technique (in my opinion) is avoiding that funny squeaking sound that mushrooms seem to make when sliced with a knife.

I have also seen this technique used in Chinese cooking. This works best with long, thin, seedless cucumbers. If you have an Asian market near you, you can probably find Japanese style cucumbers there. Or English cucumbers would work well too. 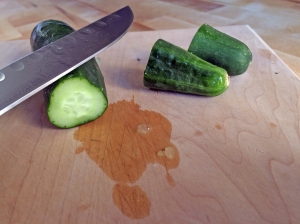 To crack the cucumber, lay it on a cutting board. Place the flat surface of a large knife against the cucumber and pound lightly when your other hand. The cucumber will crack into four sections. Slide the knife along the cucumber and repeat until the whole cucumber is completely cracked. Then break into bite-sized pieces.

Cracked cucumber is delicious in summertime foods. Try tossing with your next green salad. Or make the chunks slightly smaller and add to tabbouleh. If you leave the pieces long, the cucumber looks quite appealing on a veggie tray and the rough edges scoop up lots of dip or hummus.

Gobo is the root of the Japanese burdock plant. It looks like a brown carrot, except much much longer! Gobo roots can be as long as 3-4 feet (that is why it is usually dug and harvested by hand). Gobo sold in grocery stores, usually has had its dark brown skin removed. It might still look brown because the flesh of the gobo quickly oxidizes when exposed to air. Gobo has traditionally been used as a medicine, in addition to being eaten. It is nutritious with high levels of fiber and nutrients. Plus gobo is yummy! The white flesh inside tastes crisp and sweet, with earthy tones.

In Japanese cuisine, gobo has many uses – shredded and stir-fried, slivered and simmered, boiled, stewed, braised, baked – you name it! I have seen fried gobo chips in Japan. Also my favorite donut shop in Japan (Mister Donut) had a special edition baked gobo donut years ago. I still dream about that donut.

Smashing gobo is definitely the way to go. Fast and fun! (Watch a short video here)

To smash gobo, peel the gobo. Then using a heavy bottle (or the butt of a heavy knife, or a rolling pin), lightly pound the gobo until the cracks. Pound along the length of the gobo until it is completely cracked. Use your hands to roughly shred and separate the gobo.

Smashed gobo can be stir-fried. Or boiled for 5 minutes and dressed with the same sesame dressing used for the cracked cucumbers. Try adding a dash of red pepper flakes for extra spiciness!

If you are interested in trying gobo, but cannot find it in a grocery store or Asian Market near you, there are a few products to buy online. You can try pickled burdock or tea, or even grow it yourself from seeds! 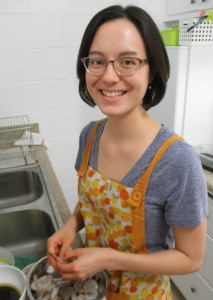 2 thoughts on “Guest blog: 3 Japanese Techniques to Cut Veggies Without a Knife”