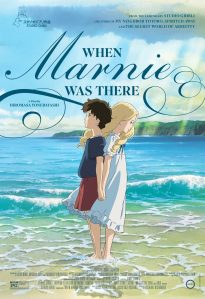 Japanese film fans in the UK will probably have noticed that a number of popular Studio Ghibli films were screening around the UK over the last few weeks as part of Studio Ghibli Forever. Not only was this a great opportunity to see the likes of Howl’s Moving Castle and Grave of the Fireflies on the big screen (a rarity in the UK) but it also did a great job of drumming up excitement for the UK release of When Marnie was There, the latest film from Studio Ghibli.

I say ‘latest’ film but When Marnie was There was actually released in Japan in 2014. Of course, there’s always a delay in licensing international films, but Studio Canal got there in the end. My main gripe with the way the screenings of this film were handled was that the locations, times and dates of screenings weren’t announced until about 4 days before official release. This was despite a lot of people posting on Studio Ghibli UK’s Facebook page asking when these details would be announced so they could plan ahead. However, publicity and promotion were done well – both online and via good old fashioned posters – so it’s good that every effort was taken to expose the mass public (and fandom) to more Japanese cinema.

Personally, I think Studio Ghibli films are my favourite Japanese exports. I saw Spirited Away in the cinema years ago and it still captures my imagination today, and is probably largely responsible for my obsession with Japanese cinema and anime. No other animated film has been able to surpass Spirited Away in my mind since, so When Marnie was There had a tough act to follow. Sadly, the studio announced it was temporarily ceasing production in 2014, following the retirement of its director Hayao Miyazaki.

When Marnie was There is based on the novel by British author Joan G. Robinson, and instead of being set in Norfolk, England, the film is set in the remote Hokkaido countryside. Anna, a sickly girl who isolates herself from her peers, lives in Sapporo with her adoptive parents but is sent to spend time with her relatives in the countryside in the hopes it will improve her health and well-being. Unfortunately, Anna struggles to make friends and spends her time sketching a run-down house across the lake. On closer inspection, the house appears to be abandoned, but when the tide rises and she has to be rescued by a mysterious silent fisherman, the lights in the house come on. Later, Anna returns to the lake to find a boat left for her and she rows it to the house, where she meets a pretty blonde girl named Marnie. They bond instantly but Marnie makes Anna promise to keep their meeting secret and, over time, Anna is drawn deeper into Marnie’s mysterious world.

The big question hanging over the entire film is simply ‘who is Marnie?’ but it’s a powerful one. Is Marnie a ghost? Is Anna time travelling? Is it all in her head? When Marnie was There has many hallmarks of a classic Ghibli film – the beautiful scenery, the rising tide, the bumpy car ride taking a reluctant Anna to her new home – and what it lacks in dramatic and fantastical scale (namely dragons and walking houses) it makes up for with poignancy and supernatural mystery. 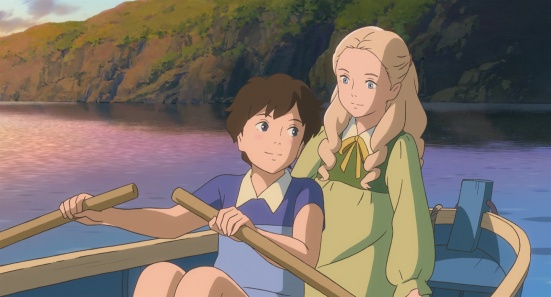 The characters are also typically Ghibli-esque, too. Anna and Marnie’s relationship is reminiscent of the sweet friendship of Chihiro and Haku in Spirited Away – and they are both troubled in their own way and therefore dependent on each other. Setsu and Kiyomasa, Anna’s relatives, were actually my favourite characters – a “little and large” comedy duo at points.

I saw the English dubbed version of this film, so can’t get away without making some comments on the translation. While I usually go for ‘subs over dubs’, the English dub certainly isn’t bad. There were definitely a few things that were lost in translation and, to a seasoned Japanese language film watcher, some of the English phrases and words felt a bit out of place. I also felt bad for not crying at the end of a Ghibli film (a first for me) and can only put this down to not being as moved by the English language when it comes to emotional scenes in anime (hysterical and over-the-top Japanese screaming apparently gets to me, though). Or maybe I’m just heartless.

I’m glad I got to see When Marnie was There on the big screen and, although it hasn’t made it into my ‘favourite Ghibli films’ list, I enjoyed watching it and would happily watch it again in its original Japanese. I’ve also added the book to my ‘to read’ list!

One thought on “Ghibli comes to the UK: When Marnie was There review”