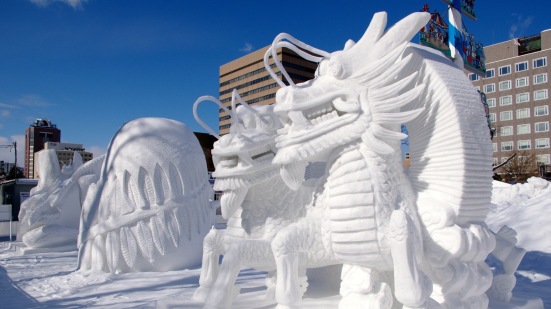 I’ve really enjoyed blogging about my holidays in Japan (which you can read all about in the Japan holiday section) but, now that I’m all up to date, I want to keep the travel element of this blog alive! So, here’s the first “take me to…” post, in which I’ll blog about Japanese places and events I want to visit.

One of Japan’s most popular winter events is the Sapporo Snow Festival (Yuki Matsuri), now in its 68th year. This magical event, held in Hokkaido, transforms the capital city of Sapporo into a wonderland of ice and snow sculptures. For seven days in February (6th-12th this year) over two million visitors from Japan and around the world descend on this northerly city. 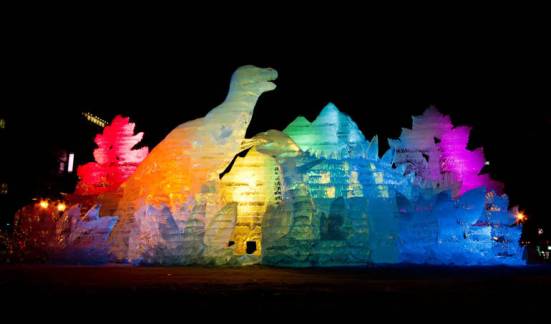 The snow festival traces its origins back to 1950, when high school students built a few snow statues in Odori Park. It has now become a large, commercialised event that is spread across three sites – Odori Park, the entertainment district Susukino and Tsu Dome.

The sculptures are amazing to see in the day or night. There can’t be many more impressive sites than a snowy sculpture (some measuring up to 25 metres!) lit up at night.

There’s a competitive element to the festival too – the International Snow Sculpture Contest sees teams from 11 countries (from Japan to Hawaii to Poland) compete to create the most amazing snow masterpieces. From churches to dragons to geometric shapes – anything is possible!

If you’re thinking of making a trip to the Sapporo Snow Festival, you’d be wise to combine it with a visit to Hokkaido’s mountains for skiing or snowboarding!

Question – if you could build anything out of snow, what would it be?

One thought on “Take me to… Sapporo Snow Festival!”