I spent the majority of last weekend at the ICA in London, where the 14th Japan Foundation Touring Film Programme (JFTFP17 for short) kicked off! This year’s programme has some fantastic offerings and there’s still plenty of chances to catch screenings at a cinema near you.

I caught 5 films but there are a total of 14 in the programme – from classic to contemporary to anime. Here is my round-up of the ones I watched, in order of preference, although I enjoyed and would recommend all of them! 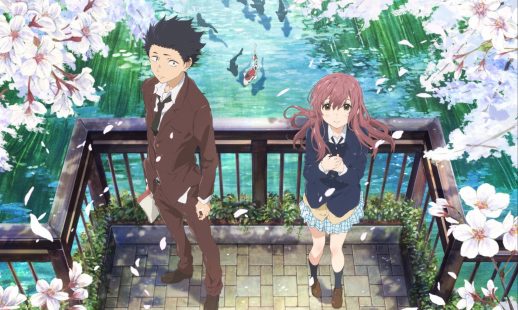 A Silent Voice (director- Naoko Yamada): Shoko, a young Deaf student, transfers to a new school where she is bullied by Shoya for her hearing impairment. While Shoya originally leads the class in bullying Shoko, the class soon turn on him for his lack of compassion. When they leave elementary school, Shoko and Shoya do not speak to each other again, but Shoya, tormented by his past behaviour, decides he must see Shoko once more to atone for his sins – but is it already too late?

Sophie’s verdict: This was by far my favourite film! A Silent Voice was released in Japan last year but it seems it was slightly overshadowed by the equally brilliant anime film Your Name, so it’s good to see it’s getting some screenings in the UK. The animation is beautiful and the story is at times heart-breaking, so bring tissues. Shoko and Shoya are fantastic characters, as are the rest of their cast of classmates, but everyone has their flaws, making the story more believable and relatable.  The film is also an interesting exploration of bullying in Japanese schools, which from my limited understanding is more rife than in UK schools – with even the teachers being complicit. Maybe that’s an idea for a future blog post? A Silent Voice is based on a manga series (supposedly better than the film, which is already wonderful) so you can get your hands on that too.

Sophie’s verdict: I expected to enjoy Flying Colours before I saw it but it ended up being one of my favourite films. It’s laugh-out-loud funny and at points silly but it has a pretty serious message at heart. Sayaka starts off as so dense she can’t even draw a map of Japan but her cram school teacher Mr Tsubota doesn’t give up on her and eggs her on to enroll in the pretigious Keio University. Unlikely? Yes, especially getting that smart in the space of a year. There are some more serious scenes, particularly with Sayaka’s father who shows next to no interest in his daughter and wife as he spends all his time with his baseball prodigy son. Flying Colours is one of those don’t judge a book by its cover kind of films.

The Mohican Comes Homes (director: Shuichi Okita): After seven years away, deadbeat rocker Eikichi (Ryuhei Matsuda) reluctantly returns to his home on a remote island near Shikoku with news that his clumsy girlfriend Yuka (Atsuko Maeda) is pregnant and that they will be getting married. After a wild welcome party, Eikichi’s old-school father collapses and a subsequent doctor’s visit reveals the worst – Osamu diagnosed with terminal lung cancer.

Sophie’s verdict: The Mohican Comes Home is the latest release from Shuichi Okita, the director behind the popular The Woodsman and the Rain and The Story of Yonosuke. The exploration of Eikichi and his father’s relationship is complex, starting off fairly comedic but becoming more poignant as Osamu’s health deteriorates. It does have some stand-out scenes, such as Eikichi ordering every single pizza from three local takeaways and a hospital-bound Osamu conducting an unenthusiastic brass band. And, just when you think the whole thing is going to end on a melancholy note, the director throws in a crazy unexpected scene that had me on the floor with laughter. A belter but also a tear-jerker!

Pale Moon (director: Daihachi Yoshida): Set in the mid-1990s, shortly after the burst of Japan’s economic bubble, ordinary housewife and bank employee Rika (played by award-winning actress, Rie Miyazawa) turns to a life of crime by embezzling money from clients’ accounts in order to please her younger lover, college student Kota (Sosuke Ikematsu). What begins as a few yen soon spirals into large sums of money and while it looks like Rika will get away scot-free, one eagle-eyed bank supervisor has her suspicions.

Sophie’s verdict: Pale Moon is a stark exploration of how one seemingly innocent mistake can spiral into something huge. Rika is trapped in a boring bank job and a loveless marriage (to a husband who just expects her to drop her career and move with him to Singapore for the sake of his). When she embarks on an affair with the teenage son of a client, a miserly old man, secretly taking money from him to help fund her lover’s debts seems almost forgivable. But then her actions get more lavish and her victims more pitiful. While Rika’s actions are inexcusable and unexplainable, her story is undeniably intriguing.

Lady Maiko (director: Masayuki Suo): Naïve country bumpkin Haruko (Mone Kamishiraishi) arrives in the traditional heart of Kyoto to attempt the impossible. Rough-hewn and with an impenetrable accent, Haruko begs to be given a chance to become the epitome of cultural sophistication: a Kyoto geisha.

Sophie’s verdict: My favourite things about this film by far were the costumes and setting (beautiful Kyoto)! I went into Lady Maiko not realising it was a musical, which isn’t usually my thing, so at one or two points it did get a bit too cringey for me. That said, if you are a fan of musicals this film is definitely worth watching. Plus, anyone who buys a ticket for this film gets entered into a competition to win a prize to Kyoto!