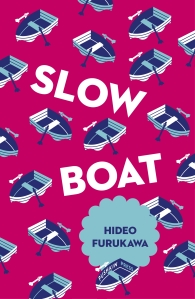 Japanese literature fans may already be aware that Pushkin Press has been releasing a series of Japanese novellas this year. The latest of these releases is Hideo Furukawa’s Slow Boat, a story of a man trapped in Tokyo.

Slow Boat flits between the present, as our narrator Boku wanders a deserted Tokyo on Christmas Eve, and the past, as he reflects on his three previous girlfriends. Each relationship has ended seemingly because of his inability to leave Tokyo.

Much of the novella is dedicated to Boku’s retelling of his former relationships, which came about at key points in his life: as a young boy sent away to a ‘special’ school, as a randy university student and as a manager of his own cafe. The first girlfriend is taken away, the second runs away and the third is sent away by Boku himself. We see Boku develop in each of these stages, with the girlfriends revealing a different part of his character, but he is continuously held back by his inability to venture beyond Tokyo’s invisible border.

In between reminiscing about these three girlfriends past, Boku ambles around an eerily empty Tokyo as he contemplates his final attempt to leave the city. The only other character of real significance is the mysterious Kaku Nohara, a journalist whose bizarre articles, my favourite being one linking a string of murders to Starbucks, litter the novella. His relevance becomes somewhat clear towards the end of the story but, even after finishing Slow Boat, I struggled to fully understand his significance.

Slow Boat is far from a linear, open-and-shut, story. There are a lot of unanswered questions and things left unexplained, so the reader has to fill in the gaps. Some people will find this frustrating but I think it’s a good sign that the story stuck with me long after I’d closed the novella.

Furukawa’s two big inspirations are Haruki Murakami and music, and this is made clear from the dream-like state the narrator occasionally enters into and the significance of the title Slow Boat. So, if you enjoy the ‘weirdness’, for lack of a better word, of Murakami’s novels then the chances are you’ll enjoy Slow Boat.

I’ve deliberately kept this review short because, after all, novellas are short. Not to mention, I don’t want to spoil anything. However, I highly recommend Slow Boat. It’s a strange and special little book that will puzzle and surprise.

One thought on “Reading ‘Slow Boat’ by Hideo Furukawa”