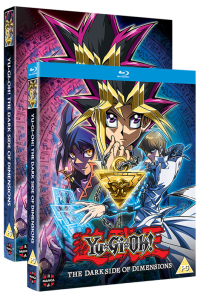 Here’s an idea for a game to play while watching Yu-Gi-Oh! The Dark Side of Dimensions – take a drink every time someone says ‘I activate my trap card’!

Out this week from MangaUK is Yu-Gi-Oh! The Dark Side of Dimensions, the follow-up movie to the original Yu-Gi-Oh! anime series that many of you will remember gracing our TV screens back in the days of Fox Kids and Jetix.

If you fondly remember characters with ridiculously spiky hair resolving the most complex life situations with equally complex card games, in which no one understands the rules and everyone makes it up as they go along, this will be a nostalgic treat for you. As ridiculous a concept the Yu-Gi-Oh! franchise is, it was a staple series for many young anime fans back in the 2000s.

Yu-Gi-Oh! The Dark Side of Dimensions was released in Japan in 2016 to mark 20 years of the franchise. It picks up where the original series, which anyone in their twenties will tell you is by far the best, a year after the departure of the Pharaoh to the spirit realm and destruction of the Millenium Puzzle which housed his spirit.

A new villain in the form of Diva infiltrates Yugi’s friendship group – Joey Wheeler, Tea Gardner, Tristan Taylor and Tea Gardner – determined to exact revenge. At the same time, multi-millionare trading card enthusiast Seto Kaiba is determined to reconstruct the Millenium Puzzle so he can duel the Pharaoh one last time. OK, so the plot’s pretty silly and it’s mainly an excuse for a reunion of your favourite characters and ridiculous card games.

At 27, I enjoyed this film far more than I would like to admit. It’s a nostalgic and hilarious romp, featuring the original voice actor casts (Dan Green as Yugi/the Pharaoh and Eric Stuart as Seto Kaiba), much to the delight of fans who grew up with the original series. All problems are solved with overly-complicated card games, even though Seto Kaiba is a millionaire with hitmen and bodyguards who has much more practical means of getting what he wants. That’s the beauty of this series. There were a few points where I lost track of the plot and characters’ motivations – all I knew was that it was time for another card game! 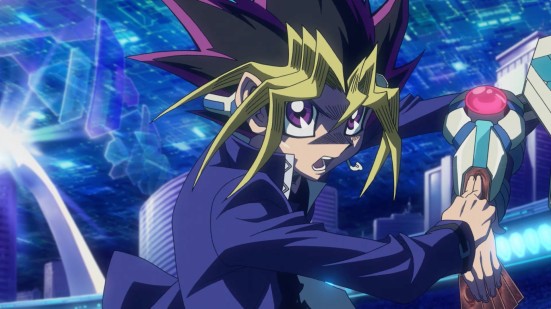 The animation is somewhat jazzed up from the days of the original series, with more CGI and impressive-looking monsters (those summoned by the cards). The soundtrack’s also enjoyable and the ending theme tune is a more updated version of the classic opening song we all remember and love.

Yu-Gi-Oh! The Dark Side of Dimensions is by no means a masterpiece but it’s a joyous watch that will hit you right in the nostalgia. It’s the perfect accompaniment to a nerdy film night with friends.

And now, I activate my trap card! Yu-Gi-Oh! The Dark Side of Dimensions is available now from MangaUK!