With a social media name like SengokuSophie, it should be pretty obvious that I have a slightly obsession with Japan’s Sengoku period (Warring States period). As a history nut, samurai are awesome and, as a long-time anime-watcher, samurai in anime tend to be cool and good-looking too.

While there are loads of anime series with the word ‘Sengoku’ slapped on them, nearly all of them are historically inaccurate at best and bordering on insultingly stupid at worst.

When I saw MangaUK were releasing Samurai Warriors (Sengoku Musou) I had fairly high hopes. This 12 episode plus OVA DVD collection is based on a highly popular video game series of the same name, so already had a bit of a following behind it. Plus, the main character is Sanada Yukimura, one of my favourite samurai in Sengoku history. 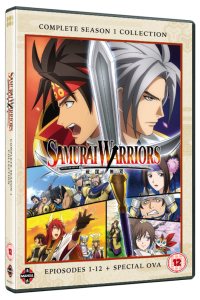 If you’re a history geek, you can read one of my older blog posts in which I try to make some tenuous comparisons between certain samurai and Game of Thrones characters. Sanada Yukimura is Ned Stark…

So, why am I going off on a tangent and talking about history in an anime review? That’s because Samurai Warriors focuses on a particular part of the Sengoku era – from the death of Toyotomi Hideyoshi and the installation of the Tokugawa shogunate (signalling the end of the Warring States period). Not only that but – shock horror – this series actually pays attention to history!

You don’t need to be a history fan to watch and enjoy Samurai Warriors but, if you do, you know it doesn’t end well for quite a few people. One of the things that shocked me about this series is that there are actual deaths. Compare that to a lot of other Sengoku anime where, if your hairstyle marks you out as a main or secondary character, you won’t die in that battle history says you did but will escape without a scratch.

While Samurai Warriors is by no means a perfect retelling of history, I appreciated that it was much more aware of its source material. The series includes all the key battles, such as Sekigahara and the Siege of Osaka Castle, and there are plenty of fight scenes to keep you entertained. The main characters naturally have more over the top and exciting battles, as you would expect. 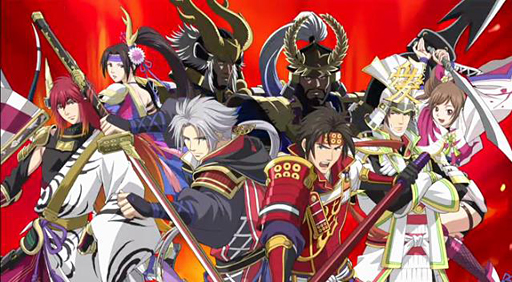 The story itself is driven by a mixture of these battles, narration and dialogue. Lots of dialogue. This was something that occasionally irritated me. The novelty of the narrator giving explanations about where which army was stationed in battle soon gets old, and some characters spend far too much time sitting on horses talking about what they’re going to do. It’s not good story-telling if you’re waiting for someone to stop talking so you can skip to the battle. The script could have been reworked so the story unfolded during fighting or some other activity.

In terms of characters, the cast is big but not to the extent you keep forgetting who everyone is. With only 12 episodes, character development isn’t exactly revolutionary. The most interesting dynamic for me was Sanada Yukimura’s relationship with his brother Nobuyuki, who are fighting on opposite sides (Toyotomi and Tokugawa respectively) and faced with the existential question whether the end of the Sengoku era will mean the end of the samurai. 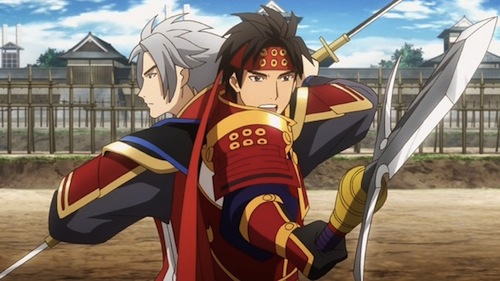 I personally didn’t warm to many other characters as they only get so much air time but, of course, I always have a soft spot for Date Masamune. Normally, this samurai is the focus of Sengoku anime series because of his signature look (eyepatch and awesome helmet) but he is very much a secondary character in Samurai Warriors.

It’s worth adding that I’ve never actually played the Samurai Warriors video games. But I imagine that those who have played the games will appreciate seeing their favourite characters in anime form!

With a decent soundtrack, fun battle scenes and a nod to history, Samurai Warriors is one of the better Sengoku anime series I’ve seen. If you can forgive the occasionally odd bit of animation mid-battle and the fact that Date Masamune is (for once) not the main character, this is one for your collection.

I don’t think anything will ever replace Sengoku Basara in my heart though. This series gets a 6.5/10 from me.

Samurai Warriors is out now from MangaUK and only £18.75, so treat yourself!

2 thoughts on “A somewhat historical analysis of ‘Samurai Warriors’”