The UK’s been very fairly lucky this year and had its fair share of anime screenings in cinemas, something which a few years ago I could only dream of. A lot of these UK film screenings have come courtesy of Anime Limited and the most recent one to grace UK cinema screens for the first time was Kenji Kamiyama’s Napping Princess.

High-schooler Kokone lives in a sleepy little town with her mechanic father (hot anime dad alert, btw). Instead of studying for entrance exams, she can’t help repeatedly falling asleep. When she does, she dreams of a fantastic technological world in which she is the princess. But three days before the 2020 Olympics, her father is kidnapped, leaving behind only a mysterious cracked tablet as a clue. As Kokone tries to find her father and evade her captors, in between suddenly falling asleep, the boundary between dream and reality becomes more blurred and Kokone learns more about her own family secrets, including what happened to her mother.

Napping Princess‘ story isn’t overly-convoluted and isn’t on the same tear-jerker level as other recent anime films I’ve seen, but I nonetheless found it very charming and very accessible. It’s rating is PG, making it a great family film, although it was predominantly adults with big child-like imaginations in our screening. For me, anime is about escapism and exciting adventures, be they big or small, and Napping Princess ticks all these boxes. While I don’t want to elaborate too much and spoil the plot, there is significant story development and some heart-racing scenes. There’s also plenty of light-hearted comedy scattered throughout, which even the most serious or ‘slice of life’ films require. It’s not simply a lovely little laugh-a-minute story though – the tears came at the end for me, during the ending credits.

In terms of characters, my personal favourites were Sawatari Morio, Kokone’s childhood friend who unwittingly gets caught up in her adventures and for whom many of the comedy moments are reserved for, and Kokone’s dad (admittedly mainly because he is a super cool hot anime dad who looks no older than 30). The moustachioed villain who pursues Kokone is bordering on stereotype but he is also pretty hilarious is a dastardly villain kind of way. 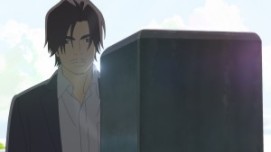 The director of Napping Princess is Kenji Kamiyama, who has been behind other anime masterpieces such as Ghost in the Shell: Stand Alone Complex, Eden of the East, 009 Re Cyborg and Moribito: Guardian of the Spirit. That alone stands this film in good stead for me.

Although Napping Princess probably hasn’t won this blog’s coveted ‘film of the year’ award, it’s earned a special place in my heart and is one I’d happily recommend. Its story is charming and develops nicely, its visuals appealing to the eyes and soundtrack to the ears. Not only that, but the centrality of tablets and technology and the Olympics makes it a very timely film. While there were one or two points where I was questioning what was going on and how Kokone was jumping around in between waking and napping, I was prepared to let it slide and just be taken along for the ride.