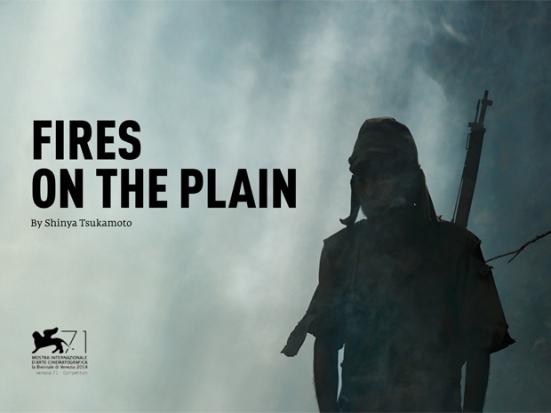 Shinya Tsukamoto has earned himself a cult following both in Japan and abroad, thanks to his previous films such as Tetsuo: the Iron Man and Bullet Ballet. While I have to admit I haven’t seen them, a quick search tell me that as a director, he is known for his artistic and varied use of graphic violence.

This is plain to see in Tsukamoto’s latest film and latest offering from Third Window Films, Fire on the Plains. Set in the remote Philippines wilderness, it tells the grim yet at times darkly comic struggles of a Japanese soldier trying to survive. Shunned by his own troop for his tuberculous and the doctor for not being ill enough to operate on, he is left on his own to wander aimlessly through the jungle. When he hears that the Japanese campaign has ended and soldiers are making their way to Palompon to escape home, he follows. But with no food, guerilla soldiers lying in wait and paranoia eating away at everyone’s minds, it’s impossible to know who to trust.

To be honest, I’m not a natural fan of war and military cinema. That’s not to say I can’t appreciate it but it can take a lot to win me over. I wasn’t expecting Fire on the Plains to be a cheery ride but was surprised by how graphic and unblinking it is, whether it’s injured soldiers writhing on the doctor’s table or flesh hanging from a soldier’s face. I did have to pause the film in the middle to make a cup of tea at one point when it became particularly difficult to watch. Hardcore fans of the genre of Tsukamoto’s work probably won’t have this issue and scoff at my squeamishness but bare with me.

Despite it’s grim subject matter, Fires on the Plain surprised with some very bleak humour. There were one or two points when I wasn’t sure if I should be laughing and felt a bit guilty when I did, but this is my natural reaction to graphic violence, be it in films or books. It’s the brain’s way of alleviating the situation and reminding you that this is a work of fiction, although in this case based on tragically real events.

I was also impressed by the cinematography, which helped to convey the scale of the land the half-starved soldiers have to traverse if they want to make the impossible journey home. The sweeping landscapes and shots over mountains in such a beautiful part of the world are juxtaposed with shaky camera angels as soldiers crawl through the undergrowth on their hands and knees.

While Fires on the Plain won’t be everyone’s cup of tea, it is worthy of a watch even for the most squeamish. Oddly enough, when I was watching I was very much of the opinion that I didn’t have the stomach to watch it again but am now thinking that it deserves a second watch.

Fires on the Plain is out now on both Bly-ray and DVD from Third Windows.