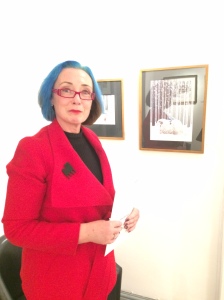 Hopefully you had a chance to check out Radiant Star Agency’s Beauty of Japan and Soul of Creation art exhibition earlier this month. This new art exhibition brought some very interesting Japanese artists’ work over to the UK. While most of the works were very much out of my price range, there were some serious collectors and curators who were in the market for new art.

To find out more about the London art scene and Japanese art, I spoke to Sue Prichard, Senior Curator Decorative Arts of Royal Museums Greenwich, at the exhibition’s private view…

What is your interest in the Radiant Star exhibition?

London is still very much the centre of the creative industries and given the whole political climate at the moment, the fallout around Brexit, I think it’s really important we continue to host international arts and crafts exhibitions. We need to continue to be on the world stage but also reach out and embrace international trade and commerce.

On the subject of Brexit, do you think Japan might have more ‘clout’ on the art scene in London in future?

I think we’re looking globally and have to if Britain is to continue to have relevance in the art market. Although this is a big issue for the creative industries as a whole. Already, we’re feeling the effects of Brexit in terms of sponsorship and corporate sponsorship, so we need to continue to be on the world stage.

Can you tell us a bit more about your work with Royal Museums Greenwich?

So, Royal Museums Greenwich (RMG) has four sites – the Cutty Sark, the Royal Observatory, the National Maritime Museum and the Queen’s House. Much of my work focusses around the Queen’s House, which is an incredibly important building in terms of British architecture. It celebrated its 400th anniversary last year and was commissioned by Anne of Denmark and built by Inigo Jones, who was probably one of the most if not the most important architect in this country. It’s a really iconic building that has the same status as Stonehenge – it’s a hidden jewel in Britain. As part of its 400th anniversary we had a complete refurbishment programme where we rehung 150 of the RMG’s finest art collection, but also commissioned new work by the Turner Prize winner Richard Wright.

We also had to decide what to do to mark the Original Great Hall Ceiling, which now resides at Marlborough House in St James’ Park. We had a completely blank canvas and had to decide whether to have a reproduction of that 17th century ceiling or something new but in keeping with the original spirit of the House. We got some of the best contemporary artists to reinvigorate the house, so it is just as relevant to the public today as it was in the 17th century.

I’ll have to visit the Queen’s House!

You really should. It’s an absolute gem and there to be discovered.

Would you say the Japanese art on display tonight here is in keeping with what you would want to have in the Queen’s House?

I think some of the work here is really interesting. The glass work is certainly stunning. If we think more broadly about the work of the past and present, the idea of artists crossing cultural boundaries is very important. Some of the art works do not appear to speak from Japan, in the sense that they do not look like traditional Japanese art. You have this mash up of different cultures so that there are some hybrid art forms that are really interesting. It encourages people to think more broadly and question what they think they know about that particular culture, which is a good thing.

So aside from the glasswork, are there any artists’ works here that really grab your eye?

Well, with any event like this, you need to come back. You come to private views and talk to a lot of people, but when you go away you start thinking more about what you have seen. That’s when you start to feel not only an intellectual resonance with a piece but also an emotional one. Then you need to come back and rediscover the work again. I always encourage people to come back at least once or twice if they’re looking at purchasing art because it’s important to feel that connection. It’s also a good idea to do some research about the artist.

Your work sounds very interesting. How did you get into the London art scene?

I suppose I was very lucky because, when I was growing up, my parents lived behind the Victoria and Albert Museum, and my parents lived behind the Tate. Although these are very famous galleries with international reputations, they’re free! So as a child and young woman I was able to go to those cultural institutions every day of my life, which is why I’m so passionate about abolishing the entry charges of museums. I spent a lot of time at the V&A and particularly loved the costume court, but what always drew my attention was the door marked ‘private staff only’. I knew if I could get beyond that door, there would be a whole wealth of material that never sees the light of day.

So, I left school when I finished my A-levels and came back to Higher Education in my early 20s, when I did my humanities degree. Then I did an MA in Museum Studies. I started working in the Tate’s archive department but in those days it wasn’t that mammoth machine, so in some ways it was easier than it is now to work my way through the organisation. From there, I went to the V&A where I worked in the textiles and fashion department and eventually ended up with RMG. It’s an unusual set of skills but I think it’s important to cover all bases if you want to work in the industry. With so many capital projects and funding restrictions, you need to think creatively in terms of project management and where you see your organisation going.

Last question – what other hidden gems would you recommend people check out in London for art?

I’d really seek out small young artists’ studios. You don’t need to spend lots of money but if you have just one piece of art you really care about, that’s really important.