October may feel like ages ago already – but I was fortunate enough to catch a few minutes with American actor and voice actor Johnny Yong Bosch at the last MCM London Comic Con! Johnny’s first major acting role was as Adam Park, the second black Power Ranger in Mighty Morphin Power Rangers, and the chances are every anime or video game fan will recognise at least a few of the characters he gone on to voice since!

Seeing as I’m unusually late in getting this interview online (it’s been a few busy weeks!) I’ll get straight to it… 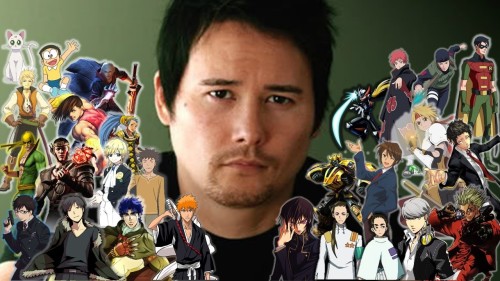 How did you get into voice acting?

After Power Rangers, I was working on an independent film with the Japanese stunt team Alpha Stunts. Koichi Sakamoto was directing and cast me in a leading role, but after filming was done we realised there had been a problem with the audio equipment, so I had to go into the studio and dub myself. The producer happened to walk in and thought I had a decent ‘hero voice’, so he asked me to come in and audition for Vash the Stampede in the anime Trigun. Then it took off from there!

So what are some of your favourite roles that you’ve voiced?

There’s so many! Ichigo from Bleach, Lelouche from Code Geass, Renton Thurston in Eureka Seven I am particularly enjoyed voicing. Nero from Devil May Cry 4 is also one of my favourites because I got to go to Japan to do motion capture for the game.

Do you have your eye on any roles that haven’t been cast yet?

Not at the moment, but occasionally when I go to Japan I enquire about shows that are airing at the time. If you go to somewhere like Akihabara there are so many new shows popping up, which makes you ask “oh, what’s that?” I remember a few years ago, I came across Gundam Thunderbolt in Tokyo and, although I don’t really have control over that kind of thing, a role in that show came along which I was able to audition for.

Is voice acting a glamorous career?

Well, it could be! It’s just nice! On camera, you’re pretty much stuck looking like you, unless there’s makeup or special effects involved. In voice acting, you can look like anything, even a monster. Also, with filming you can be sitting around and waiting for hours, whereas in voice acting you just go in and get straight to work.

If you hadn’t gone into acting or voice acting, what else do you think you might have ended up doing?

Well, I have a band and I love writing and playing music. So, I think if I wasn’t acting I would be making music even more.

If you were trapped in the world of one of your characters, which would it be?

That’s a tough one! Some of the worlds are quite serious and I wouldn’t want to be trapped in a serious world, so I’d probably either choose Doraemon or Yokai Watch. Nothing too dangerous!

What’s the best or strangest gift you’ve received from a fan?

The strangest was underwear, like proper Grandma’s underwear! I found out later it was a joke gift from some male fans. I wouldn’t say that was the best or worst gift as it was quite funny afterwards… Probably the best present I received was a hand-made huge blanket with characters I’d voiced crocheted on different panels, which was really special.

Thanks to Johnny for taking time out of his busy schedule at MCM! You can find out more about his roles here and follow him on Twitter here.